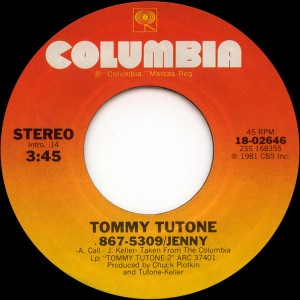 The song reached No. 4 on the Billboard Hot 100, but perhaps a larger footnote in pop culture history is the movement of prank phone calls it inspired to the number in the song’s title. If you grew up in the 80s and didn’t dial 867-5309 and ask for Jenny at least once, you clearly were not utilizing your rotary phone to its fullest capacity. Those who had the number in various area codes were flooded with calls. For instance:

Check out Wikipedia for a continuation of this list and, if you still can’t quite remember the phenomenon that was 867-5309 back in the early 80s, read this very cool 1982 People magazine article about it, complete with interviews with members of the band.