I don’t know why sometimes I get frightened
You can see my eyes, you can tell that I’m not lyin’

Remember New Zealand rock band Split Enz? We can thank them for Crowded House, which singer and guitarist Neil Finn formed when he left the band, and for the impossibly catchy tune I Got You. This song doesn’t just get into your head; it sets up camp and parties there for days. When I think of new wave pop and the early days of MTV, I think of I Got You.

From the album True Colours, I Got You was released as a single in 1980 with Double Happy as the B side. It reached No. 53 on the U.S. chart, but shot all the way to No. 1 on both the Australian and New Zealand charts. Written by Finn, it was the band’s first international hit. I don’t own any Split Enz on vinyl, but True Colours and I Got You have been on my Want List for awhile. 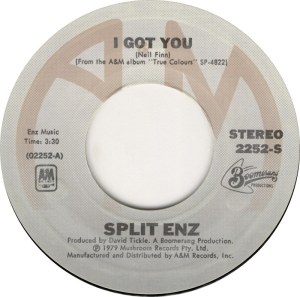