N.W.A’s been in the news a lot lately, thanks to the success of the movie Straight Outta Compton, their recent induction into the Rock and Roll Hall of Fame, and reunion at Coachella over the weekend.

I didn’t listen to a lot of N.W.A in the 80s, but I discovered the song Express Yourself years later on the compilation album Yo! MTV Raps: A Journey Back in Rhyme. The song features Dr. Dre on the mic and samples Charles Wright & the Watts 103rd Street Rhythm Band’s 1971 song Express Yourself. I instantly loved it – maybe it was the beat, the rhymes, or the fact that I was an English major and there’s very few songs that get funky with subjects and predacits.

Written by Ice Cube, Express Yourself was released in 1989 as a single from N.W.A’s debut, groundbreaking album Straight Outta Compton. Although the song’s lyrics deal with free expression and radio censorship, Express Yourself is lighter sounding fare for N.W.A, which pioneered gangsta rap with Compton. It’s one of the group’s only songs not to contain profanity or violent content. Express Yourself didn’t chart in the United States, but it reached No. 26 in the United Kingdom.

The 7″ release of Express Yourself, which includes Straight Outta Compton as the B side, is not an easy or an inexpensive find. If you can find one in decent condition, it will likely cost you about $40. 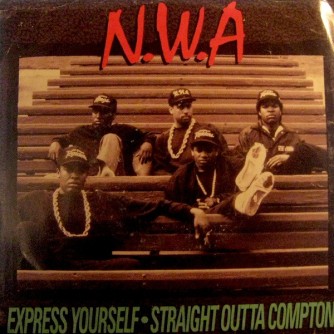 7″ release of Express Yourself