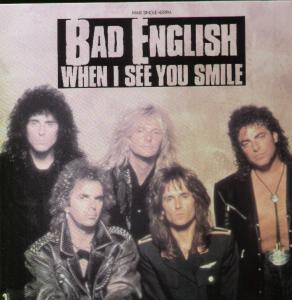 When I See You Smile by rock super-group Bad English was released on September 16, 1989, with Rockin’ Horse as the B side. It was the second single from the band’s self-titled debut album.

Formed in 1987, Bad English included Journey members Neal Schon and Jonathan Cain, former Babys bandmates John Waite and Ricky Phillips, and drummer Dean Castronova. When I See You Smile was their first and only No. 1 hit in the United States, where it spent two weeks at the top spot on the Billboard Hot 100. It also reached No. 1 on the Canada Top Singles chart.